For centuries, Epsom salt has been regarded highly owing to its marvellous health benefits and especially in reducing soreness, eliminating toxins and relaxing the body muscles. The salt contains some great properties such as magnesium which works well in reducing inflammation while at the same time enhancing nerve functionality. Epson salt psoriasis treatment offers great relief to the patient by soothing the skin flare-ups when they occur.

Epsom salt is used in bathing and this helps to exfoliate the flaky and thick skin that is synonymous with psoriasis. The soak also helps in soothing the common symptoms such as itching and irritation thus allowing the patient to enjoy a stress-free life. It should be used regularly to help in the cleansing of the skin pores while at the same time minimizing psoriasis outbreaks or recurrence.

It may also be used for people suffering from psoriatic arthritis as warm baths take the pressure off the joints and weight-bearing muscles, so in theory can help ease stiffness too.

To enjoy the effects of Epsom salt as a natural psoriasis treatment, you need to dissolve two cups of salt into your warm bathing water and soak therein for at least 15 minutes and then wipe your body with a clean towel. This can also be followed by applying your favorite moisturizing oil. The Epsom salt can be used along with other remedies such as Dead Sea salts or oatmeals among others. Soaking in baths is also good for your mental health as a stress relief tactic.

Epsom salts as a treatment for psoriasis testimonials and success stories

The following comment was posted by a pustular psoriasis patient who has had to endure the pain and discomfort for many years. However, the use of creams has not helped in any way and he had to start using other remedies including Epsom salt. According to his testimony, this has helped him live without blisters this far although using the product along with other products.

This other patient has endured psoriasis for more than 20 years and after trying various remedies, nothing seemed to work. However, two days of soaking in Epsom salt have produced some great and encouraging results with the spots on the skin disappearing gradually. The story is really amazing. 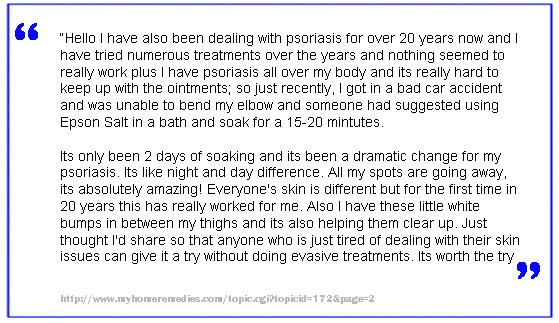 The next comment is from someone who witnessed some tremendous changes when using Epsom salts to improve your chronic skin condition. She also combines the treatment with some petrolatum jelly among other procedures.

This next comment is from someone who has suffered from psoriasis for almost half a century. However, he finds great solace in using both Dead Sea and Epsom salt as their preferred skin treatment for psoriasis.

This comment is from someone who normally uses Dead Sea salt as a remedy for his pustular psoriasis. However, once he runs out of his main treatment solution, he results to the use of Epsom salt which according to his words works.

This post is from someone who has benefited from the use of Epsom salt in her efforts to treat psoriasis. She uses this product over dead sea salts as it is cheaper and easier to locate in the United States.

Negative comments about this psoriasis treatment

The following negative comment is one of a few that I have seen. Although it is not entirely negative, it brings out an undesirable picture from a patient who found it helpful at some point but later experienced some negative effects after some period of use.

The comment below does not really show the negative effects suffered by the patient but the only negative thoughts emanate from the fact that Epsom salt contains sulfur which she does not think is important.

I rate Epsom salt as beneficial for psoriasis as a management tool but I also see it as the poor man’s alternative to Dead Sea Salt Psoriasis Treatment! Therefore I give Epsom salts an effectiveness score of 6/10 for treating psoriasis naturally.

HOW LONG BEFORE YOU SEE RESULTS FROM THIS PSORIASIS TREATMENT

When using Epsom salt as one of your psoriasis skin treatments, the duration of effectiveness manifestation depends with individual cases. However, one can expect some immediate relief while the major changes will occur within a 4 weeks or so. It is important to combine the Epsom salt treatment with other remedies such as diet in order to make the process more effective.

IS IT WORTH INVESTING TIME AND MONEY IN EPSOM SALTS FOR TREATING YOUR PSORIASIS?

It helps to reduce scaling and works well as a stress reliever but will not “cure” psoriasis just on its own. Use it in conjunction with some oils such as jojoba or coconut oil which should be applied directly after bathing to keep the skin moisturized and pain-free. Consider changing to a healthier diet and lifestyle to fully control your psoriasis, and of course if you are struggling with your psoriasis at the moment, always reach out to your doctor to keep on top of all the latest and innovative treatments.

By John Redfern founder of smartpsoriasisdiet.com | Google + Profile |
I have reduced my psoriasis by 95% through changes to my diet and introducing supplements to ensure my body is in its optimal condition. This enables me to control my psoriasis for good. I hope you can too by following my free eBook 1. The statements above have not been evaluated by the Food and Drug Administration. This product is not intended to diagnose, treat, cure, or prevent any disease.

2. Packages and prices might be different if purchasing outside USA.

3. Smart Psoriasis Diet will not be held responsible for any product information and ingredients, or any ingredient changes of this product, or any product our company carries.

4.The information provided on this site is for informational purposes only and is not intended as a substitute for advice from your physician or other health care professional or any information contained on or in any product label or packaging. You should consult with a healthcare professional before starting any diet, exercise or supplementation program, before taking any medication, or if you have or suspect you might have a health problem. Information about each product is taken from the labels of the products or from the manufacturer's advertising material.

How To Stop Psoriasis Itching At Night

Does Olive Oil For Psoriasis (Including Scalp Psoriasis) Work?

Subscribe to my newsletter & get my
Free Smart Psoriasis Diet Plan eBook
direct to your inbox.