Indigo naturalis is sort of greyish dried powder or clumping processed from the leaf or stem with leaf of Baphicacanthus cusia (Nees) Bremek, Polygonum tinctorium Ait or Isatis indigotica Fort.

Don’t worry the previous line sounded like double dutch to me as well! The main thing to know is that it is used in chinese medicine to clear heat and remove toxicity, cool blood, and clear liver-fire.

It will stain fabric but thankfully does not stain skin and will wash off with water. So advice to people who try Indigo naturalis as natural treatment for psoriasis is to apply the concoction at nighttime, buy a tight fitting dark coloured pyjamas, use the non sexy bed sheets and wash off in the morning.

This following success story was the first one to pique my interest in this chinese herb as a useful natural psoriasis treatment. The most important part of this comment is the way she describes how the redness disappeared. A lot of natural products can reduce the scaling but very few can reduce or eliminate the redness associated with psoriasis.

Now time for some scientific proof that this Indigo naturalis works as a psoriasis treatment. The following quote is a press release for a psoriasis medical study performed in Chang Gung Memorial Hospital in Taipei, Taiwan using a treatment that consisted of applying an ointment containing indigo naturalis. 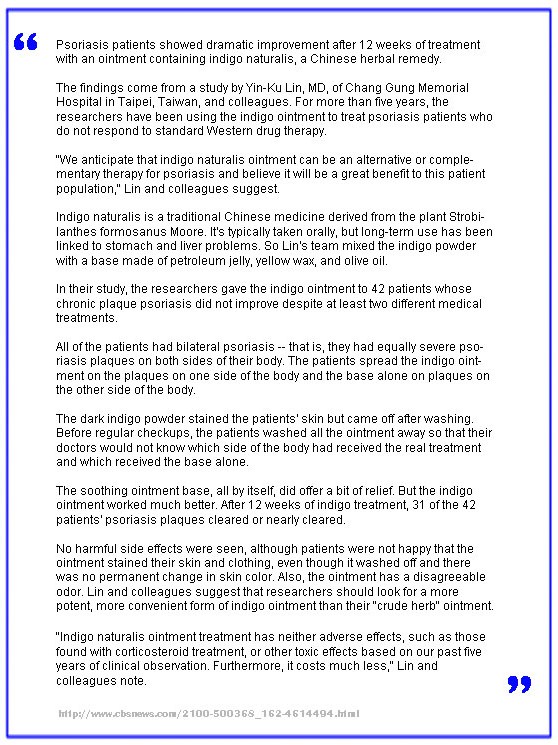 The following comment relates to the product champori. However this comment seems a bit too good to be true. Also please bear in mind that this company will send you some free product if you provide testimonials and before/after pictures so testimonials may be biased. I have seen a few testimonials on forums on the internet that seem less OTT than the comment below and has helped numerous people.

The following success story also relates to champori but as you can see by this honest reviewer, she never alludes to the products name. She also uses it in combination with other treatments that I will cover in the top 25 natural psoriasis treatment success stories list. 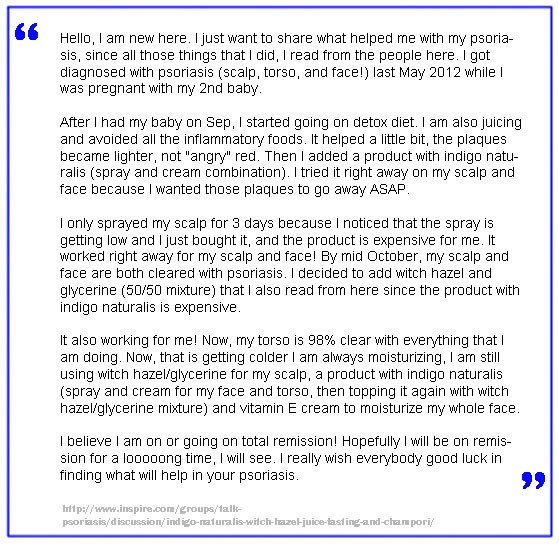 This psoriasis sufferer created his own shampoo using regular fructis shampoo mixed with Indigo naturalis powder. He suffered from bad scalp psoriasis and also redness on the hairline that could flare up at any time (This is a complaint I think is very common but we hear little about it). the reason this guy tried this as a shampoo was to be less reliant on tar based shampoos as he was getting sick of the tar smell.This is his review after 1 month. 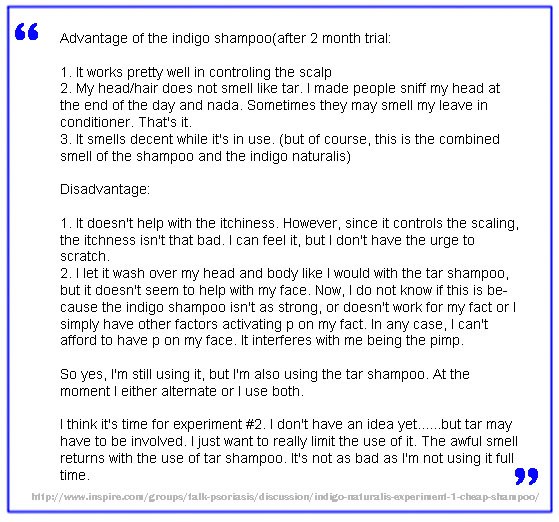 Here are a few positive comments for the champori cream and spray that can be ordered over the internet to treat psoriasis. I am in no way affiliated to this product and have never tried it just in case people are wondering… 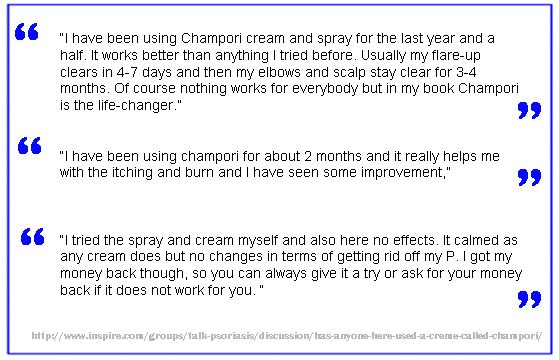 The following quote deserves special mention as this is the girl that is single handedly championing this product on Youtube and psoriasis forums like Inspire. She has before and after pictures and I am hugely impressed by them, especially as she said she cleaard all the redness on her forehead and face within 3 weeks. She also said that it took much longer to clear the lesions from her body as they were more stubborn.

Here is a final quote from someone also recommending champori… 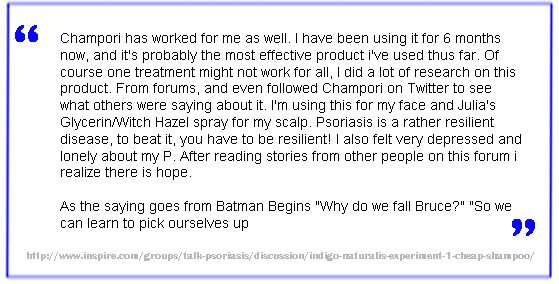 I have included the following comment as a negative even though there is some positive to be taken from it. He was responding to a questions some asked about the product champori being any good.

He states at the end that the chapori product caused him to itch, but then he made his own cream with indigo naturalis and seems to have gotten some relief. Unfortunately he never revealed how he made the cream which I personally would like to know. 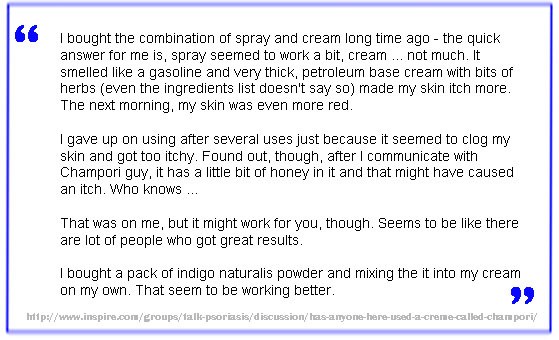 Here is another comment in relation to the champori psoriasis treatment that is neither positive nor negative.

Again this comment relates to the champori product for psoriasis treatment. I don’t like these particular comments as they do not describe how often they applied the cream, how long they tried it for etc. Some people are just lazy and may try a product for 2 weeks and then give up when they see no improvement. I personally like to try things out for 6 weeks before I will mark it off as tried and tested.

I have to say that I was surprised by the number of positive comments regarding indigo naturalis as a natural psoriasis treatment. Also the negative comments that I read didnt describe in detail how long they tested it for and how often they applied it. therefore I am giving the Effectiveness Score for Indigo naturalis (Champori) a very respectable 7/10.

HOW LONG BEFORE YOU SEE RESULTS?

For non stubborn patches expect to see results within 3 weeks. I would also assume if you lead a healthy lifestyle and are fit and well (other than your psoriasis obviously) then expect quicker healing times.

For stubborn patches and patches that have been around for long time, I would advise a 2 month test period minimum. You owe it to yourself to try this remedies out properly.

IS IT WORTH INVESTING TIME AND MONEY IN INDIGO NATURALIS PSORIASIS TREATMENT?

I believe this product must be on the top of the list of natural psoriasis treatments to try. Whether you want to go the cheaper route and create your own formula using the indigo naturalis powder mixed with a base cream of your choice or for the more expensive but more convenient champori equivalent, the choice is yours. Good Luck!

By John Redfern founder of smartpsoriasisdiet.com | Google + Profile |
I have reduced my psoriasis by 95% through changes to my diet and introducing supplements to ensure my body is in its optimal condition. This enables me to control my psoriasis for good. I hope you can too by following my free eBook

How To Stop Psoriasis Itching At Night

Does Olive Oil For Psoriasis (Including Scalp Psoriasis) Work?

Subscribe to my newsletter & get my
Free Smart Psoriasis Diet Plan eBook
direct to your inbox.